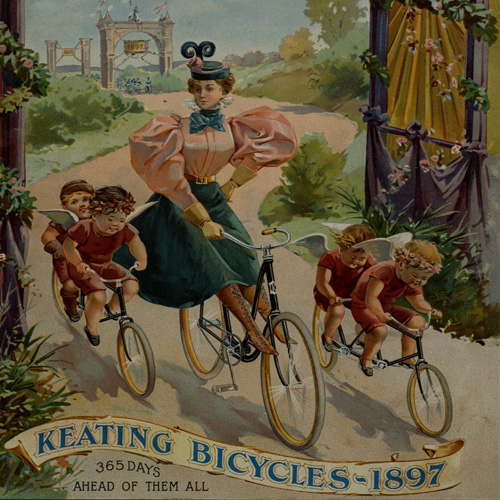 Despite economic depression, the 1890s had an air of optimism and progression that led social commenters to name it the 'Gay Nineties'. One advance that captured both the enthusiasm and the technological advancement of this era was the booming popularity of bicycles. To mass produce bicycles new methods for producing metal frames, ball bearings, washers and sprockets were developed, laying the groundwork for later automobile and aircraft manufacture. Outside the factory, they were part of wider social developments including the momentous move for women’s rights.

Trade Catalogues and the American Home contains bicycle catalogues spanning the 1850s to 1950s. A few that particularly caught my eye were for the Columbia bicycle, made by Pope Manufacturing Company, and contained female targeted advertising. 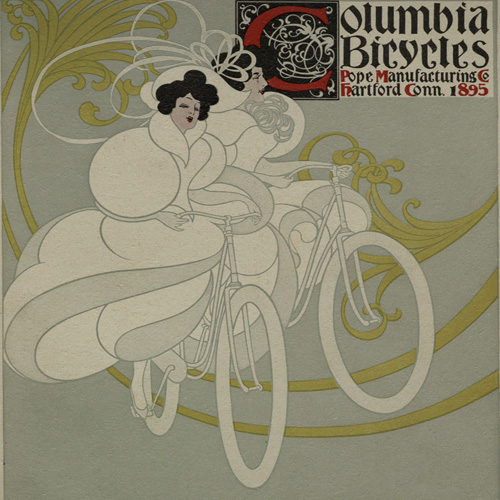 Although the bicycle was initially divisive between the classes due to the high price tag, it had an equalising power when it came to men and women. In a now well quoted 1896 article in New York World Susan B. Anthony declared that bicycling had ‘done more to emancipate women than anything else in the world'. The bicycle provided women with a means of crossing social spaces cheaply and independently. No drivers were needed, no licences needed to be granted, and in this sense the bicycle gave women an escape from the domestic sphere and clearly defined roles that nineteenth century society placed on them.

The popularity of the safety bicycle with women made a considerable
contribution to the movement for 'rational dress' as it did not take long for female cyclists to seek more practical alternatives to corsets and billowing skirts. Bloomers, a type of baggy ruched trouser as seen here and here, came back into style, named for the women’s rights activist Amelia Bloomer.

The Columbia Bicycle 1890 catalogue extends its greetings to 'wheelmen and
wheelwomen', recognising its audience as spanning both sexes. The catalogues not only acknowledged their female readers, but aimed themselves directly at them and their consumer power. Browsing the catalogues within the collection, it is noticeable just how many choose images of women as the focus for illustration and design. This is particularly noticeable when contrasted with women and products pitched to women featured in sporting and early automobile catalogues.

The ‘Rise’ of the Home-Baked Cake 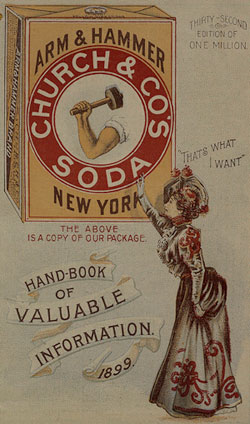 Innovations and developments in food technology over the course of the nineteenth and twentieth centuries made home baking easier, faster and produced increasingly impressive results. Trade Catalogues and the American Home features numerous recipe books and guides, produced by food and appliance manufacturers to demonstrate the many applications of their products. These fascinating documents chart the evolution of home baking from a tedious necessity, part of the everyday process of feeding one’s family, to a fun hobby that allowed women to create special occasion centrepieces that were as beautiful as they were delicious.

Before chemical raising agents were developed, cakes were leavened using whisked eggs or yeast – a time-consuming process that required leaving the batter to prove before baking, often overnight. These cakes were usually simple and fuss-free, with little time left for decoration. The arrival of baking powder gave home bakers an easier and more effective way of making their cakes rise, giving the finished bake the light, fluffy texture familiar today. Invented by English chemist Alfred Bird in 1843, baking powder was not widely used in America for several decades. This premium catalogue from the Western Pearl Co. encouraged distributors for their baking powder by promising rewards such as bicycles, silverware and even rifles to anyone who sold enough of it.

As increasing numbers of women joined the workplace, the search continued for ways to make home baking even more accessible. The first patent for the process of making ready-made dehydrated cake mix was obtained in 1933 by John D Duff, a Pennsylvania-based molasses manufacturer. Duff’s cake mix contained powdered eggs and required almost no preparation before baking other than the addition of water. Nevertheless, keen to promote the diversity of his product, Duff produced can-shaped recipe booklets demonstrating how the more adventurous baker could use his cake mixes in various ways.

By the early twentieth century, the earliest handheld and standing electric food mixers had been developed, with the first KitchenAid mixer 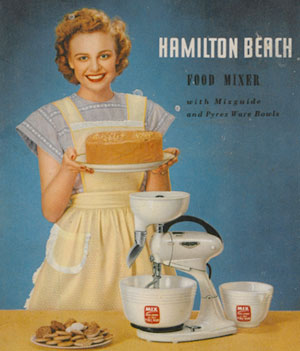 appearing on the market in 1919. Although not widely seen in American households until the middle of the century – and, even then, limited to those able to afford them – these devices saved time and alleviated much of the drudgery associated with creaming butter and whisking eggs for cakes. Manuals such as “How to Get the Most Out of Your Sunbeam Mixmaster” provided recipe ideas and serving suggestions alongside operational instructions. Thanks to concurrent advances in refrigeration – allowing perishable ingredients such as butter and milk to be kept for much longer – technology had now made cake-making easier than ever.

The increasingly visual nature of twentieth-century consumer culture drove a parallel interest in making food look as good as it tasted. This can be seen in recipe booklets issued by refrigerator manufacturers, showcasing ever more elaborate jellies, frozen desserts and other elegant dishes. No longer an afterthought, cake decorating became celebrated as a creative pursuit – an easy way to impress family and friends. By the 1950s, according to Betty Crocker, cake without frosting was as unthinkable as “a birthday without a cake”.

Within Trade Catalogues and the American Home are hundreds of catalogues and leaflets related to home remedies, ‘quack’ cures, and items for at-home personal care. These documents provide a fascinating insight into domestic remedies before the days where most people had access to a certified doctor. 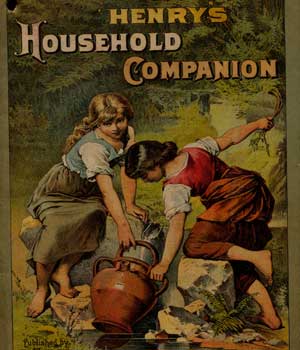 From home almanacs such as Henry's Household Companion, 1885 which suggests treatments for common remedies – while trying to sell products – for the American consumer. To testimonials for new ‘cures’, such as The Great Herb Remedy which contains letters from consumers claiming the remedy has cure their eczema, kidney pain, nerves, rheumatism.

It is possible to see many of the techniques and products sold for health concerns from the late-nineteenth century. Many of which, we now know to be at best ineffective and at worst unsafe. One potentially concerning trend visible within these documents is the inclusion of new technologies, such as electricity, into these remedies and cures.

The Natural Treatment and Cure. Schaefer's New Patented Electric-Healing Apparatus claims to be the future for all diseases using Schagfer’s Electric-Healing apparatus. Featuring in this leaflet extolling ‘Every disease curable and every man his own physician by using this wonderful Apparatus.’

Similar apparatus appears throughout the collection, such as The Electropathic Guide: prepared with particular reference to home practice; containing hints on the care of the sick, the treatment of disease and the use of electricity with full directions for treating over 100 diseases (twentieth edition) This document features instructions on the use of electrodes in home treatments. 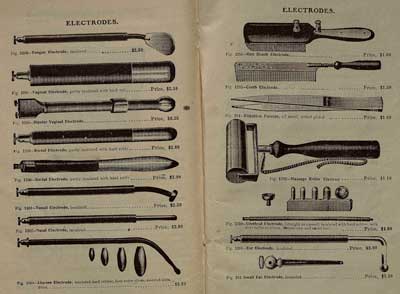 The reality of health and medicine within the time-period of this collection can be seen through these documents; many American consumers would not have had easy access to a doctor, and would not have had the same understanding about general health and the human body as their modern counterparts. The almanacs and guides to home care would have been indispensable, and this reliance on written instructions could have been exploited by ‘hacks’ and ‘quack’ cures.